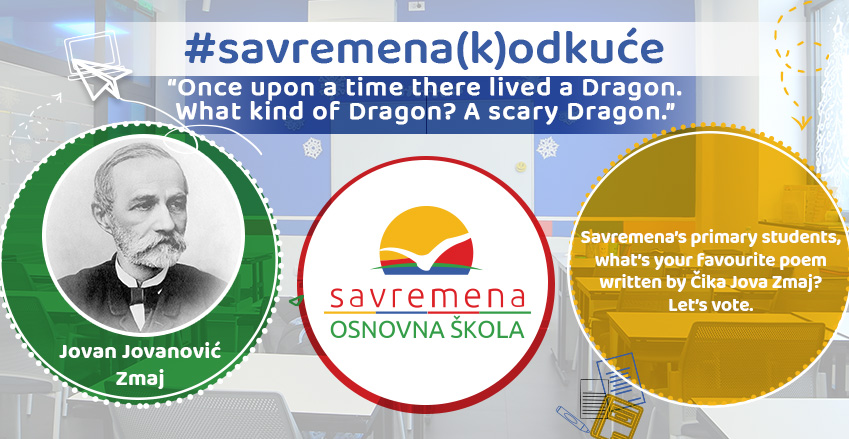 Once upon a time there lived a Dragon. What kind of Dragon? A scary Dragon

Once upon a time there lived a Dragon. What kind of Dragon? A scary Dragon

Once upon a time, long before we started celebrating 1 May by going for lunch at our grandparents’ house or playing outdoors, with the smell of dad’s barbecue around us, there lived a Dragon. A real Dragon with a thick white moustache. However, he didn’t breathe fire, but love and pure poetry.

He was born nearly two hundred years ago and spent his early years in his hometown of Novi Sad. He studied hard, listened to his parents, developed his hidden talents and selflessly helped others.

When he was ready for university, he had to leave his home, as there was no Internet, distance learning and smart devices in those days. Back then, people learnt from yellow, rugged pieces of paper on which lessons were written with goose quills and ink.

First he went to Bratislava and then to Vienna, the capital of the Austro-Hungarian Empire, a country that doesn’t exist anymore, but was very strong, influential and advanced at the time. He came back to his Novi Sad as a Law graduate; and as a big and strong Dragon.

But hush – nobody knows this.

For a long time, he kept this superpower for himself and his friends. They spent time together, exchanged poems and stories, and talked (or whispered, rather) about love and friendship, and seriously pursued their daily jobs.

But, they liked writing. Hmm, this is perhaps too weak a word. They loved writing. And so they came to the idea to launch a magazine called “3 May”. This was their code, which, written in Cyrillic, perfectly hid their well-kept secret.

However, they made one mistake – they forgot that there were people who didn’t know about orthography. And so out of the name of the magazine launched in 1864 by the famous lawyer, doctor and poet, Jovan Jovanović, Zmaj was born. The most popular children’s poet whose poems were loved by our parents, their parents and the parents of their parents.

And all this because someone misread “3 May”, written in Cyrillic, as “Zmaj” (Serbian for dragon)! Someone who didn’t know the difference between cardinal and ordinal numbers.

We know, you won’t believe us; but this is how it happened!

Therefore, instead of the 1 May celebration, you could associate this date with the famous Čika Jova Zmaj.

You know, the moustached man who wrote Gaša, Gaša, sad Gaša, what will become of you and The School for Ducklings; the one who wrote about Laza, mama’s boy and Winter, Winter, So What?, in which he described the beauty of this season.
Savremena’s primary students, what’s your favourite poem written by Čika Jova Zmaj? Let’s vote. Tell your class teacher or Serbian teacher Sara Popov Petrović what your favourite poem is, and we will publish the winning poems on 3 May.

We’re waiting for your vote!