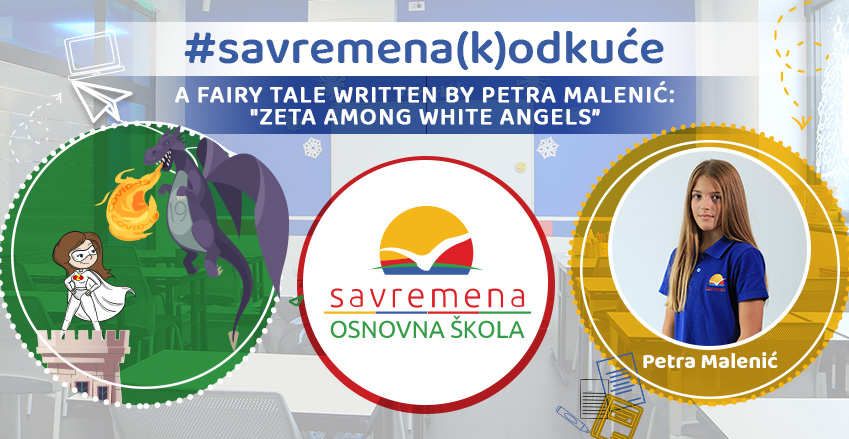 “My Fairy Tale”. This was an assignment for Year 5 students in which they wrote about their favourite fairies and elves, superheroes, action figures and cartoons.

However, the essay written by Petra Malenić once again shows how children see the world around them and how important their parents and grandparents are in their lives.

Therefore, in the segment #savremenaatyourhome, we bring you Petra’s fairy tale, in which brave Zeta manages to defeat the scary Dragon COVID.

In a garden in Vračar, a little girl called Maja sat with her granny.

While enjoying the view of the Church of Saint Sava, the girl asked her grandma to tell her a nice fairy tale.

“Granny, can you tell me a fairy tale?”, asked the girl.

“Of course, honey. I know a fairy tale I think of every day, my love…

The story takes place a long time ago, in a city on two rivers, at a time when people had wrong values and did wrong things. This was a time when everything, my love, was sort of wayward.

This was a time of fear; of dangerous creatures that ruled the world.
It was clear that the planet was coming to an end, as the earth and the sky were poisoned.

To make things worse, the Earth was under attack by very dangerous COVID dragons. They struck fear in everyone; they burnt everything and mercilessly killed anyone who didn’t go into hiding.

I sometimes think that everything that was good and positive had disappeared; only pure evil remained on Earth.

In these terrible times lived Zeta. A normal girl who worked in one of the many Towers of Salvation, where ill people were treated.

She had many good and humane friends who helped others; however, NOBODY KNEW THEY EXISTED.

Their mission was not to brag and boast about their work, but to do GOOD and help people.

They worked day and night for free, as they were proud of the altruism of their activities.
One night, darkness covered the city. Great balls of fire dropped from the sky. The earth and the sky were on fire. The largest ever COVID dragon, the one with the sign 19, attacked the city in order to turn everything and everyone in it into ashes.

All the inhabitants ran to their basements, as no one dared confront the dragon.

Zeta watched helplessly as the number of casualties increased. COVID-19 wreaked havoc; everyone was frightened and the number of injured and killed people grew by the hour.

One morning, while tending to the wounded people in the Tower, she saw a small boy seriously hurt by the terrible dragon. No longer able to hide her anger, Zeta screamed:

“THIS IS A TERRIBLE INJUSTICE! ENOUGH IS ENOUGH! IT’S TIME WE CONFRONTED HIM! IT’S EITHER US OR HIM!’

She called her colleagues, who supported her unanimously, and courageously went to fight the dangerous dragon.

Upon seeing them, COVID-19 howled: “YOU ARE ALL CRAZY, I WILL DESTROY YOU WITH A SINGLE BREATH OF FIRE!’

Zeta was brave and proud, as were all her colleagues from the Tower of Salvation. They knew the dragon was stronger, but they courageously stood in front of the evil ready to destroy them all.

Soon the word spread about their bravery in other Towers of Salvation, where all their colleagues were UNITED and determined to help them fight the dragon, despite the great risk. Their desire to rise and confront the dragon was immense.

The battle was hard and arduous, but the bravery of Zeta and her colleagues was incredible.

Thanks to their unity and determination, the DRAGON WAS FINALLY DEFEATED!

People around the world heard of their bravery. This motivated her colleagues from other countries to unite and fight the evil dragons that were terrorising the planet. A great war started in which EVIL WAS EVENTUALLY CONQUERED.

People were celebrating the victory, praising the courageous fighters nobody had paid attention to.

A new era began. Everything reversed to normal and those who truly mattered were once again valued and praised.

A new, good king, chosen by the people to rule the planet, invited Zeta to thank her and give her a reward. Zeta proudly addressed the king:

“Dear king, thank you for the reward you wish to bestow on me, but I must say that I already have my reward. My reward is FREEDOM. Freedom for my people and for my colleagues from every Tower of Salvation on the planet who bravely fought this evil; together, as one.”

“ELIZABETAAAA, where are youuu?”, I heard my grandpa’s voice in the distance.

At that point, I saw tears in her eyes. I realised that MY GRANDMA was, in fact, BRAVE ZETA, a former nurse from Belgrade during the terrible coronavirus.

I realised that she was one of the White Angels, the nurses and doctors in white coats who were united and proud on the front lines of the fight for our nation’s health.

“THANK YOU, WHITE ANGELS”, I told my grandma and gave her a strong hug.
In the City on two rivers,